Well the time has come where we wanted to take her out and run her through her paces, spending a few nights aboard and just get more comfortable with the boat and start planning for outfitting her accordingly. (Nothing like being out, realizing what you forgot to bring. Hence notepad and pen for copious notes)

The plan was to head into the sound with our friends of Hayden Bay and Destiny and go through Agate passage and hang on the hook in Manzanita Bay. But even the best laid plans can be foiled by weather, NOAA forecast was “10 knot to variable” with variable being 25+ kicking up some nice wind waves between 5 to 7 feet and a “Small craft advisory”

So change of plans, luckily we have the option of looking “inwards” and we decide to head into Lake Washington and enjoy a favorite spot by Seward Park, Andrews Bay.

The trip there was uneventful, we all met up in Lake Union and headed out to Lake Washington, between 520 and I90 we did encounter some confused wind waves between 2-4 feet which produced some good spray across the bow. 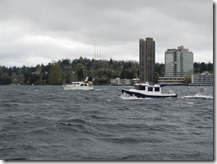 Once past I90 on the east side of Mercer island it mellowed out (we had to go the long way around, south of Mercer because Hayden Bay is to tall to cross under the westward span of I90) we make it around Mercer island and now heading north I get a chance to “surf” the waves on the following sea. Both Sofie my daughter and I are having a great time.

We make it into Andrews Bay and Hayden Bay drops her Rocna, Destiny rafts to her port and we align my swim step with that of Destiny and tie Current Obsession to Destiny’s port side, all secure we turn of the engines and enjoy the silence…we have arrived.

The rest of the weekend is spend enjoying great company, snacks, food and adult beverages and Sofie is having a blast, she has at her disposal a “3 boat” jungle gym in which she can move about often gravitating back to “her” mid-ships berth with a book or her iPad.

Sunday AM after coffee in Destiny’s wheel house and as Sofie wakes up I head back to Current Obsession to make blueberry pancakes and test out the propane stove, I burn the first one but the birds benefit from that, after breakfast we head out and the weather is great, some sun and barely a ripple on the lake. We make it back to Lockhaven Marina and I am already contemplating where our next trip will be. 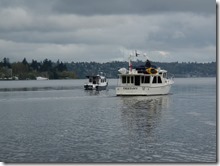 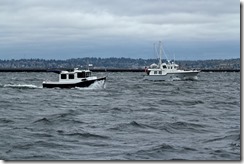 This entry was posted in Boating. Bookmark the permalink.

Langdon Cook
Fat of the Land

What is my current obsession you may ask?

What is my current obsession you may ask?

Exploring the coastal waters of the Pacific Northwest